After a dreary winter, pops of colour begin to appear in parks and gardens up and down the county. Soon after, the tentative sound of birdsong builds to a dramatic symphony of voices that eventually peaks in May. Until then, there are mates to win, nests to build and food to gather now that spring is here.

Leading the way into spring is the snowdrop, a pretty white flower with three inner petals called tepals that hang from its green stem. Its Latin name Galanthus nivalis translates as “milk flower of the snow”. In recent years, the snowdrop has become an indicator of a changing climate.

In the 1950s, snowdrops usually flowered towards the end of February, but as a result of milder winters, they are now appearing far earlier, sometimes even before the New Year. Snowdrops are most active when many pollinators are still dormant so they speed up their own dispersal by splitting their bulbs which enable new flowers to grow and multiply.

The early spring days are also when young badger cubs will take their first tentative steps outside, under the watchful eye of their mother. Badgers are born in the midst of winter but spend their first months in the safety of the sett so that they’re ready to start building up their fat reserves in spring. Badgers do not hibernate, but their activity is significantly reduced during winter. Spring is a good time to see them when vegetation is still low and the warmer temperatures bring earthworms back within reach. When trying to find badgers, look for well-worn paths, mounds of fresh soil and latrines filled with droppings, although always be careful not to disturb the animals.

Another spring herald to look out for is the beautiful lesser celandine, a member of the buttercup family. Similar to daffodils, these bright yellow star-shaped blooms emerge from February to late April and have many colourful local names such as golden guineas, butter and cheese and spring messenger. Lesser celandine open and close their petals in response to slight changes in temperature, enabling them to be open during the day and closed at night. This mechanism, known as nyctinasity, is thought to be a way of protecting the flowers from pollen loss, weather damage and predation by slugs.

Don't miss the spectacular 'water ballet' of great crested grebes at this time of year.

If you’re up for a stunning performance of “water ballet”, make sure to visit a lake in early spring where you’ll witness the extraordinary courtship display of great crested grebes.

During early morning and late evening, pairs will perform elaborate movements that often begin with sharp head turns from side to side before they stretch their long necks back to preen their feathers. They will duck underwater and reappear beak to beak with their mate, rising up until they are almost out of the water while rapidly ruffling their feathers. Sometimes they will offer a pile of weeds to each other, which they shake left and right as they tread water.

This display is thought to strengthen the bond between male and female in preparation for breeding.

Rising spring temperatures awaken queen bumblebees, who waste no time in finding nectar to boost energy levels after using all their reserves in hibernation. It is time for the queens to establish new colonies, which could eventually reach numbers of up to 400 individuals.

After feeding, a queen searches for a suitable nest site for the colony. When she has selected a good spot, the queen constructs a mound made from pollen and secreted wax from her body to build the nest for her first brood of eggs.

She also stores a small amount of nectar in the nest, so she can continue to feed while incubating the eggs. After several days, the eggs hatch into white larvae, which are fed on pollen and nectar that the queen brings for them until they eventually grow into adult worker bees.

When nature awakens in spring, it will give you many exciting spectacles to enjoy. Get started and join us on a guided walk in your area. 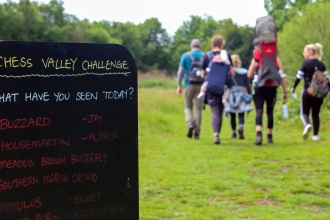 Together, we can make Hertfordshire and Middlesex a little wilder.