Little ringed plovers first bred in the UK in 1938 at Tring Reservoirs and are summer visitors, arriving in March and staying until August when they migrate back to Africa for the winter. The birds nest on bare gravel and the carefully-managed habitats at Panshanger Park and Amwell provide perfect homes for them.

Key to the breeding success of the plovers is good habitat management. At Panshanger Park, Herts and Middlesex Wildlife Trust has been working with Tarmac, the site owners, to compact and scrape an area of the park to create a mixture of pools, bare ground and low vegetation.

We’re very pleased to see little ringed plovers breeding at these sites. The Trust and Tarmac have worked hard to create good habitats for the birds and it is wonderful to see this work paying off. We will continue to monitor the nests and hope that breeding will prove successful with the fledging of a new generation.

These breeding pairs of plovers mean that Amwell and Panshanger Park join only two other sites in Hertfordshire – Tyttenhanger wetlands and Rye Meads Nature Reserve - where little ringed plovers are known to have bred this year. At the last census in 2007, only 1,200 pairs of little ringed plovers were found to breed nationally. Panshanger Park and Tyttenhanger wetlands are both mineral sites extracted and restored by Tarmac and clearly demonstrate the key role that the mineral industry can play in habitat creation for rare species.

The habitat creation work at Amwell and Panshanger Park forms part of the Lea Valley Wader Strategy, a collaborative project between Herts and Middlesex Wildlife Trust, the RSPB, Lee Valley Regional Park Authority and Tarmac, to address the decline in breeding wading birds in the Lea catchment. 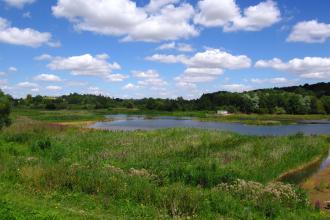 Former gravel pits that have been restored to a diverse wetland nature reserve. 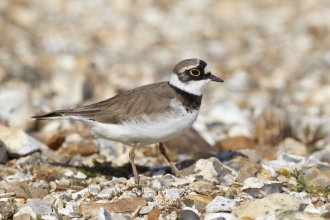 The Little ringed plover first nested in the UK in 1938, but has since moved in happily! It has taken advantage of an increase in man-… 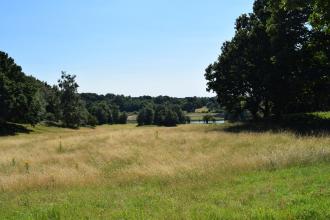 The Trust's partnership with Panshanger Park

Despite the wet weather, the Festival of Wildlife attracted almost 2,000 people to Panshanger Park to discover and celebrate wildlife.…

A team of pigs will be helping us keep Amwell Nature Reserve in shape this winter.

A pair of hobbies have successfully bred at Panshanger Park